Getaway adventure from Humahuaca to the Yungas > Argentina

A unique experience, walking part of the Qhapaq Ñan (or Camino del Inca, monumental pre-Columbian engineering work) in the Sub-Andean Sierras. Starting the journey in the incredible town of Santa Ana, with the ladies wearing their famous hand embroidered shawls. From there, you descend to the nuboselva through the towns of Valle Colorado and Valle Grande, in the middle of the yungas, you can have direct contact with its people, so special in the simple and with such rich values ??that you will never forget. Argentina in the heights > Argentina

A trip that combines the infinite nature of the Iguazu Falls with the extensive Andes Mountains, from the North with its ancestral culture to the Patagonia lakes, passing through the highest region of America. Between jungle and waterfalls, multicolored hills, ancient customs, vineyards and wonderful landscapes, you will discover an authentic and natural Argentina. A trip to Argentine tradition, culture and cuisine, from the center to the Northwest and then to the Cuyo region, a different trip through a country full of contrasts both in its landscape and in its traditions. This voyage of discovery through Northern Argentina, southern Bolivia and northern Chile, offers us an unparalleled panorama of the Quebrada, the Salares, the Altiplano and the Desert, as well as the people who inhabit that area centuries ago and their culture. The combination of excursions and walks and the selection of sites that we travel allows us to know the spectacular landscapes of Northern Argentina, Uyuni in Bolivia and Atacama in Chile, but also brings us closer to millenary life forms, traveling the same paths as the villages originating first and the Incas later, admiring the cultivation terraces in the high valleys and the grazing of animals in the ravines, as well as salt flats, multicolored lagoons, incredible dunes and impressive geyseres, which are part of this amazing itinerary. An unforgettable journey through the Andean ancestral paths, of friendly people, rich in traditions, with exquisite cuisine and artisans that are worth knowing. An experience of smells, flavors and colors from the North to the Cordillera, through the mountains of Cordoba, important wineries and boutique wineries, from ancestral techniques to the best technology. If wine and gastronomy is your thing, here you will find the best of our country. Tour of the most amazing and traditional places in northwestern Argentina. Starting in the Valley of Lerma, which offers among its fertile and warm valleys a unique sequence of nature, customs and stories. Continuing then through the Puna; region as diverse as unique in the entire planet, then visiting the Quebrada de Humahuaca, meeting place and union between different cultures and environments. Small villages planted by the mountains reflect the indigenous legacy in their food, customs and festivals such as carnivals, indigenous markets and the cult of Pachamama or Mother Earth. Valleys and gorges of the Inca Trail transports us to the heart of an ancient culture, hidden among the hills, walking with the backpack on our shoulders is the best way to get in touch with the residents who offer their hospitality. 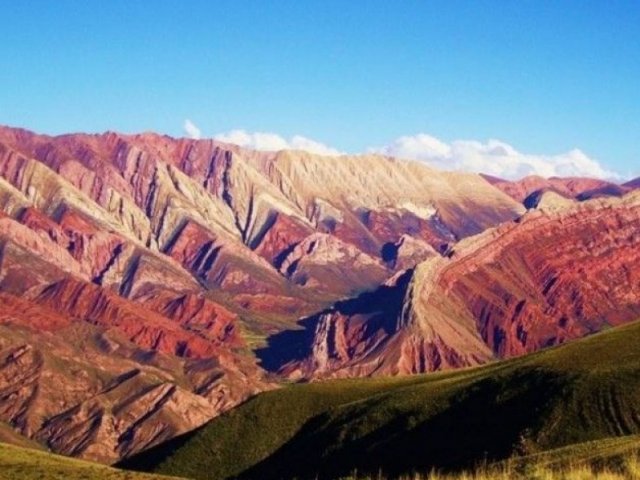 · Number of participants: From 3 to 12 people

The lagoons, salt flats and volcanoes of the highlands were the scene of fascinating scientific discoveries in recent years.

The report of the oldest fossils on the planet, alive, in the lagoons of Argentina and Chile, position these extreme environments as a time machine that recreates the conditions of the original land of 3400 million years ago.

Welcome to the ROUTE TO THE ORIGIN OF LIFE, fasten your seatbelts, we will make a trip of 3.4 billion years. Tour to the Nort with Salinas and Puna > Argentina

Entrance through Tucumán-exit through Salta, a wonderful trip through the Andes Mountains, the Calchaquí Valleys and their ancestral secrets. Getaway adventure from Humahuaca to the Yungas